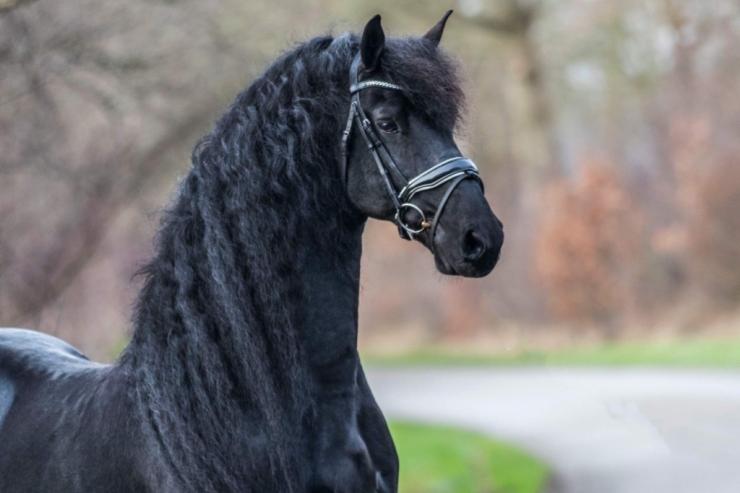 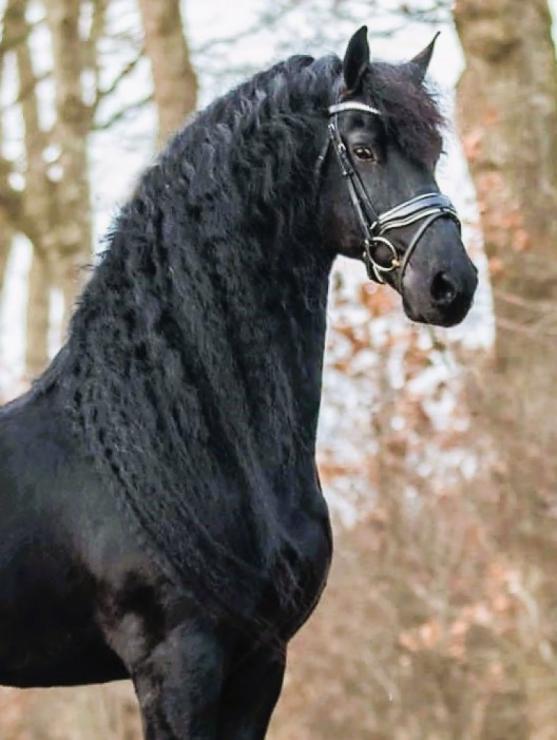 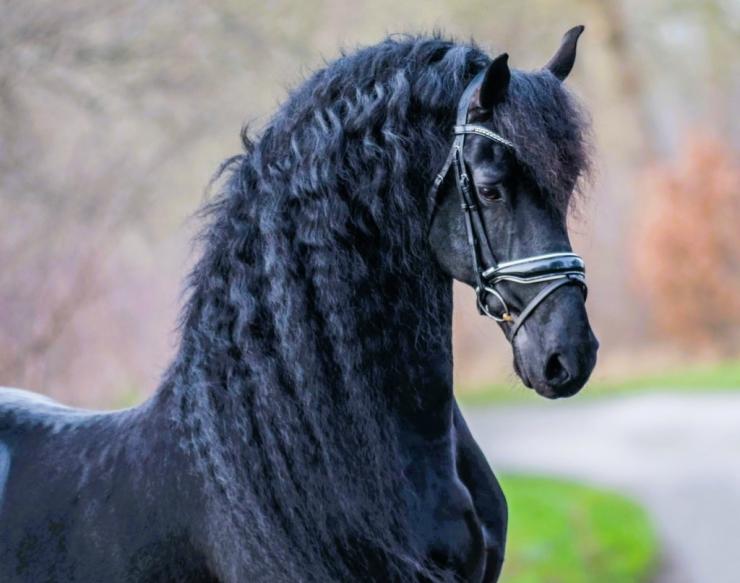 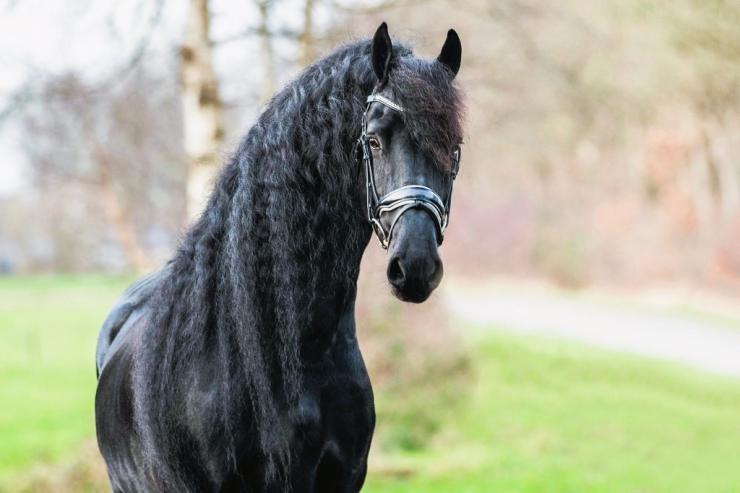 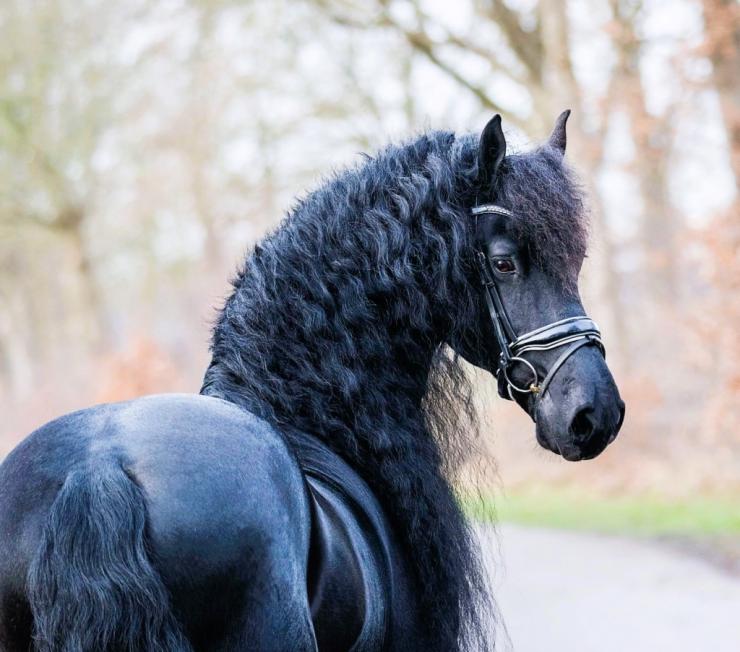 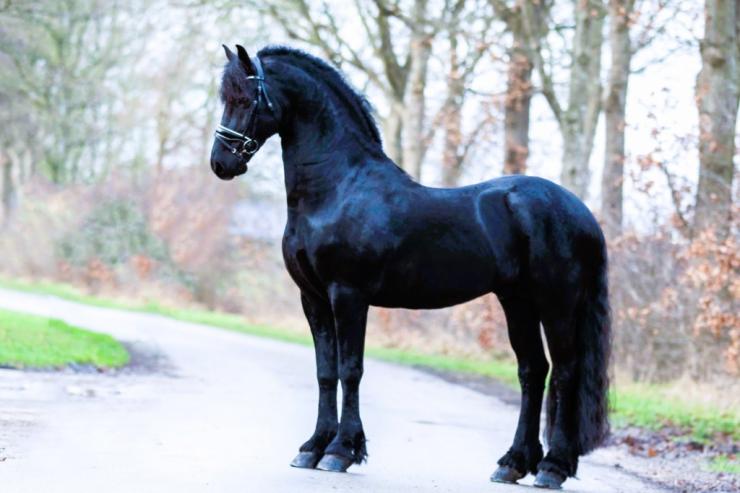 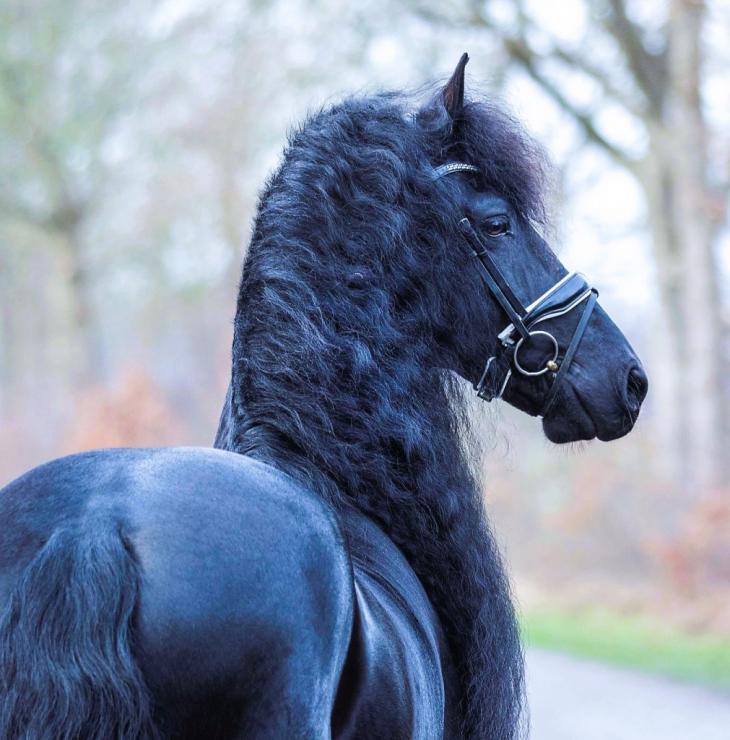 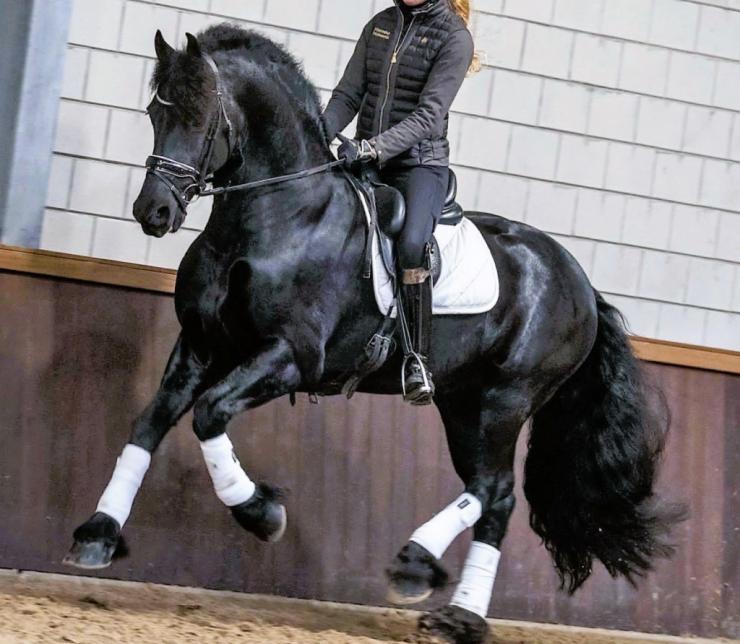 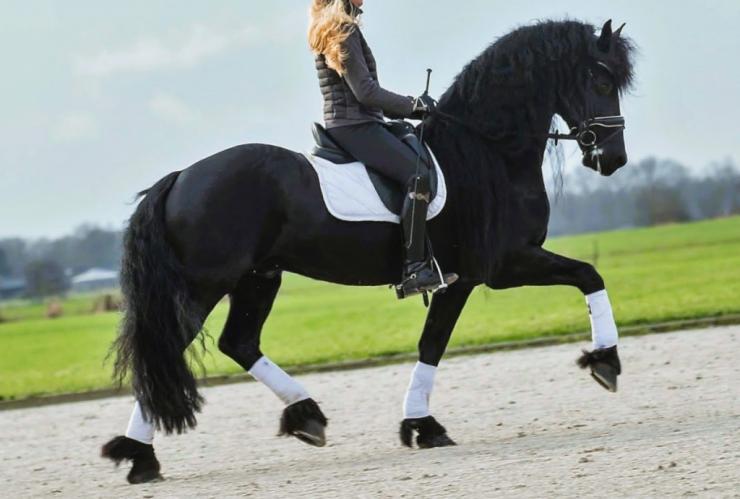 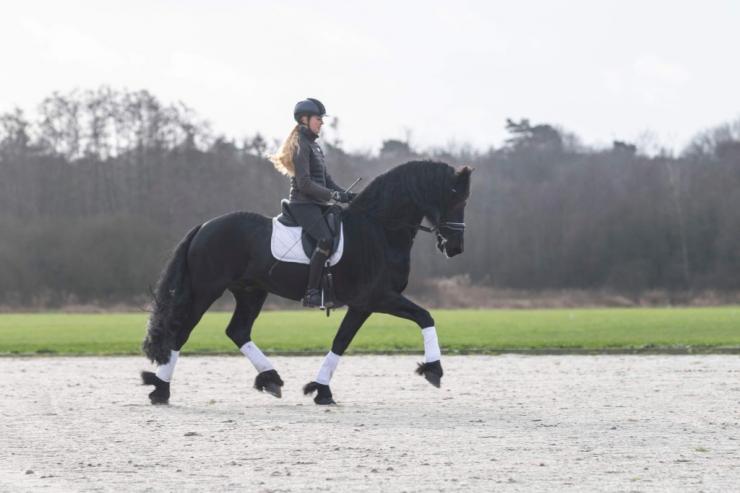 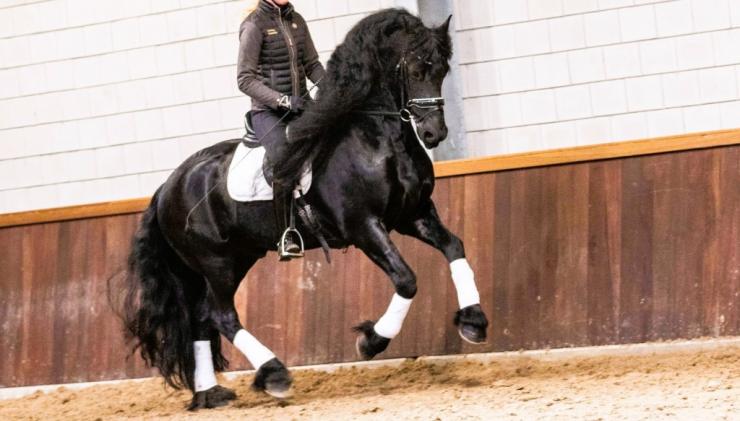 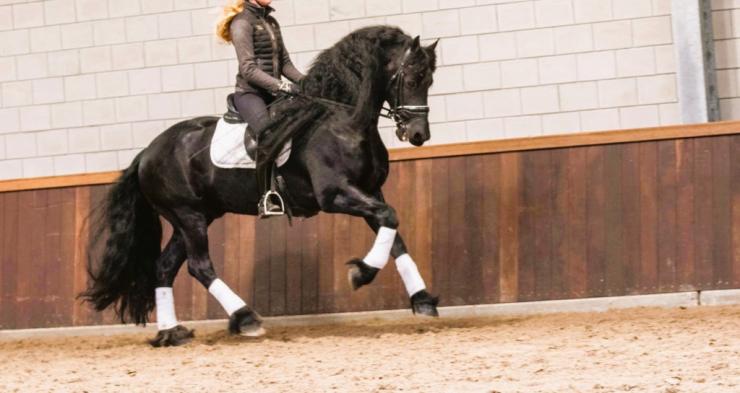 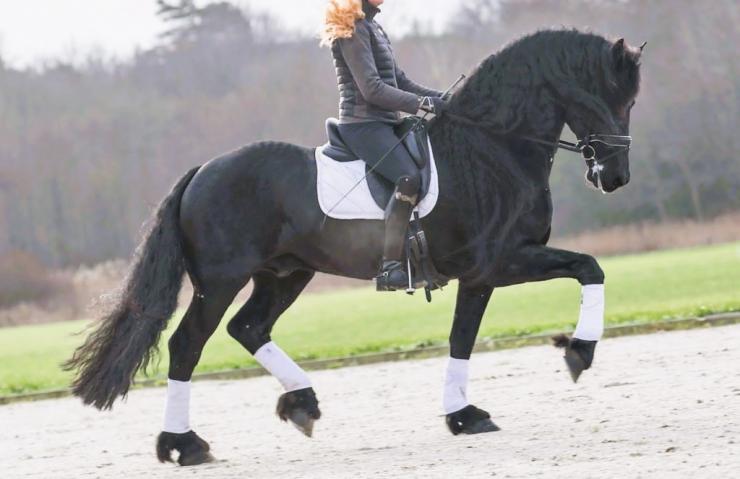 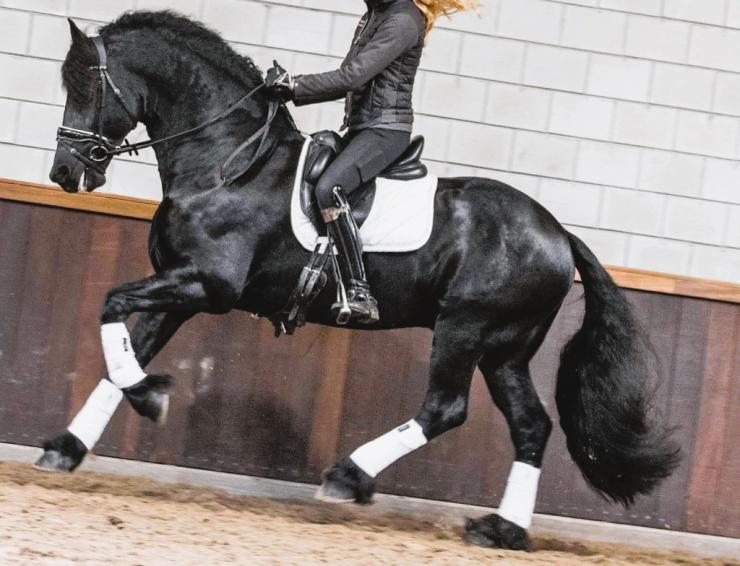 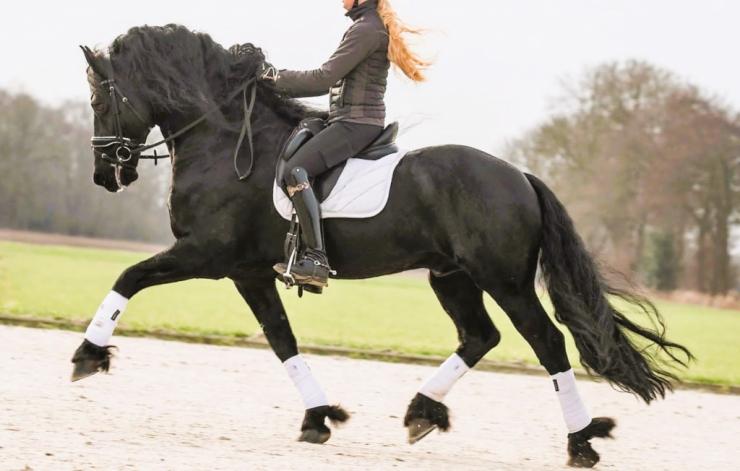 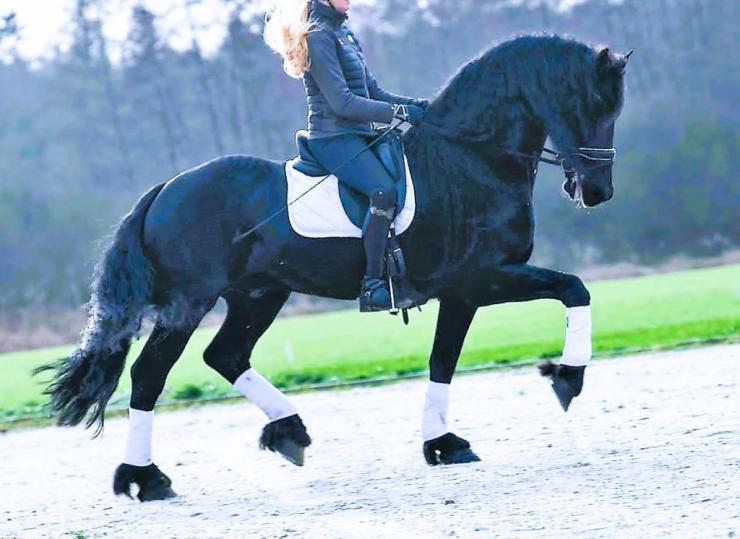 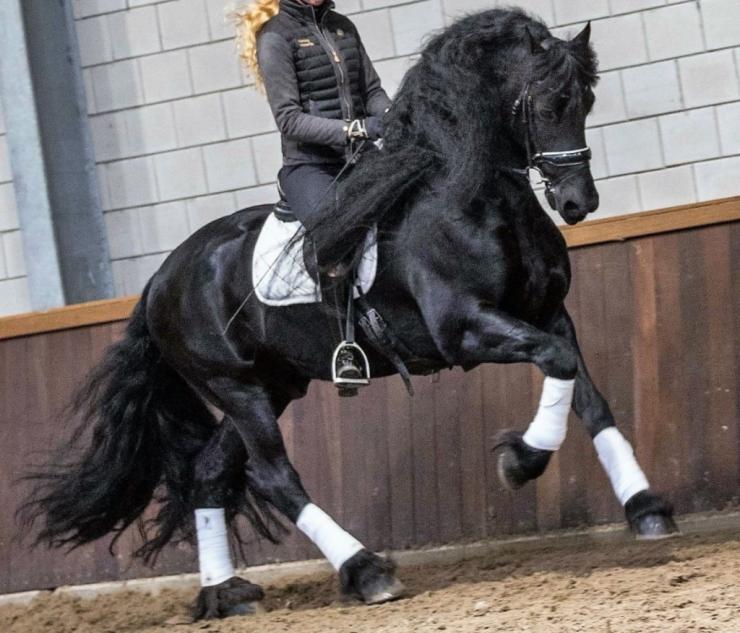 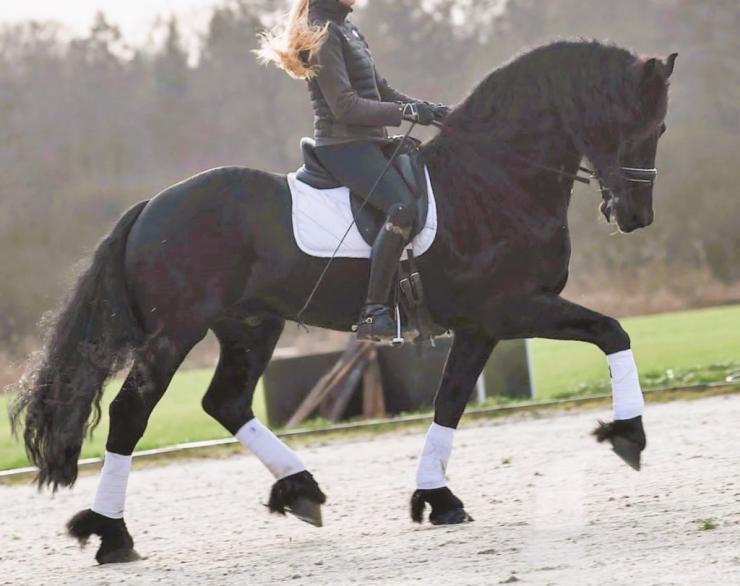 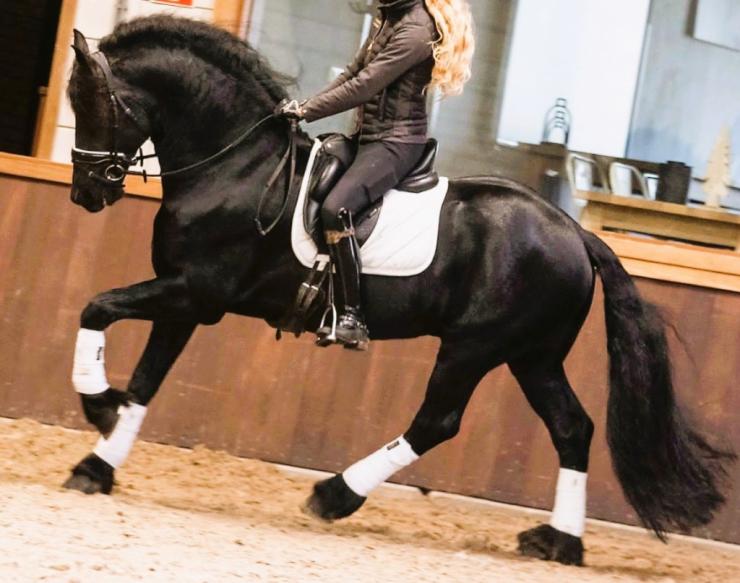 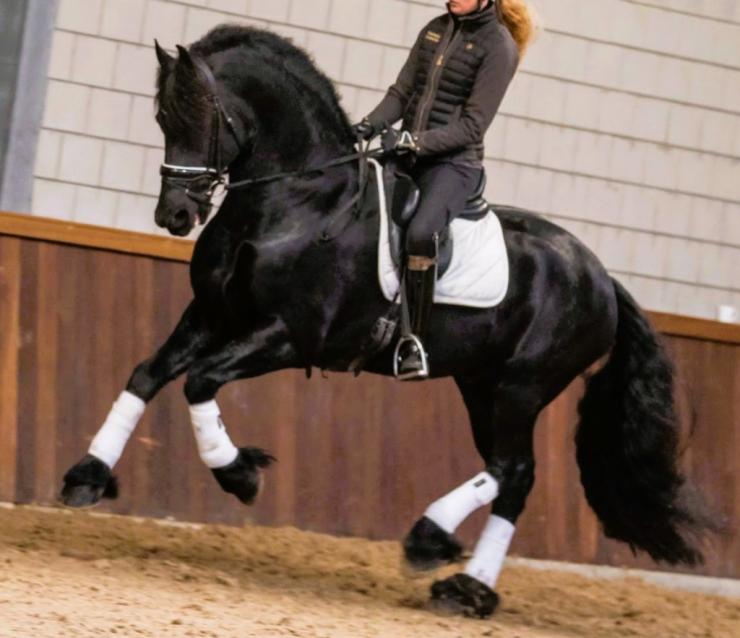 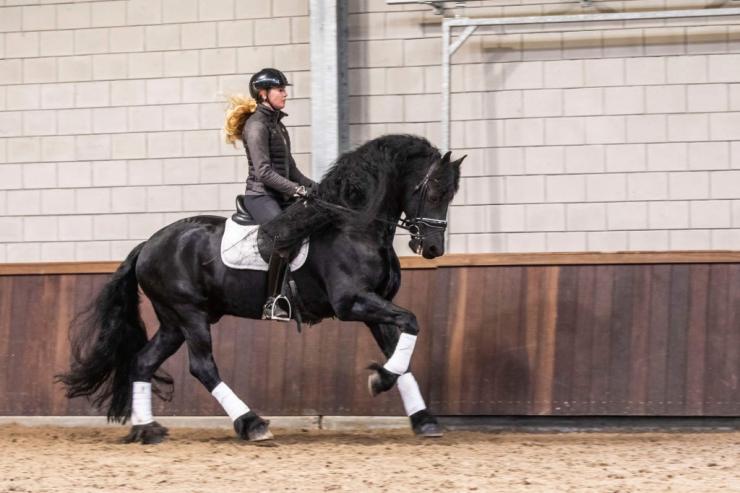 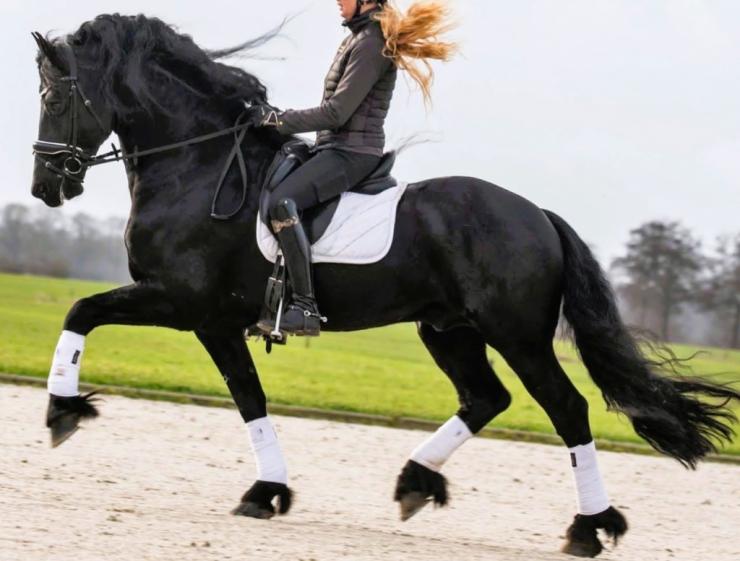 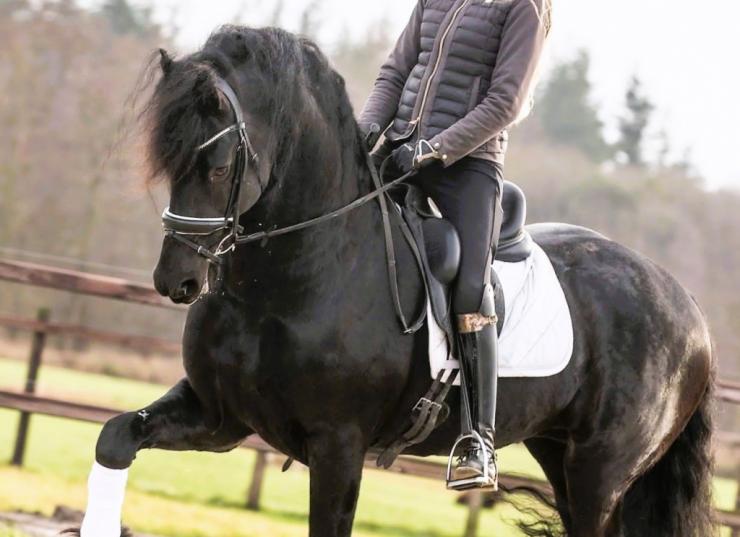 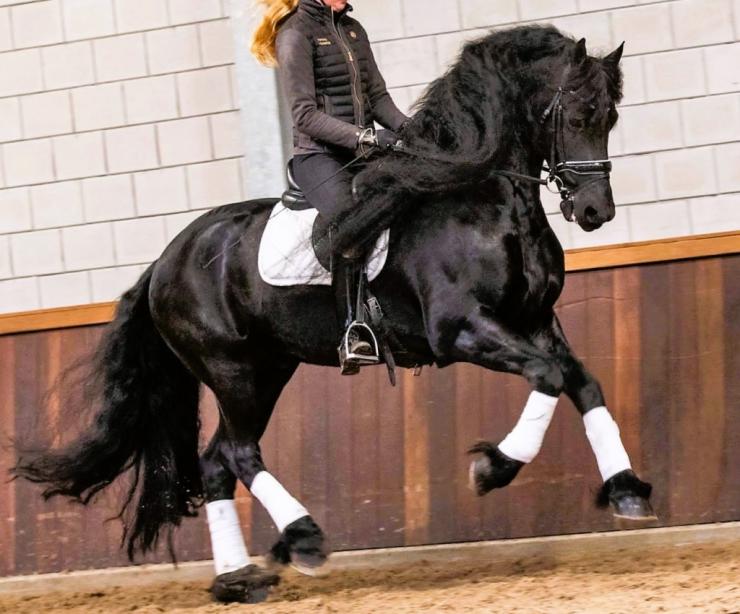 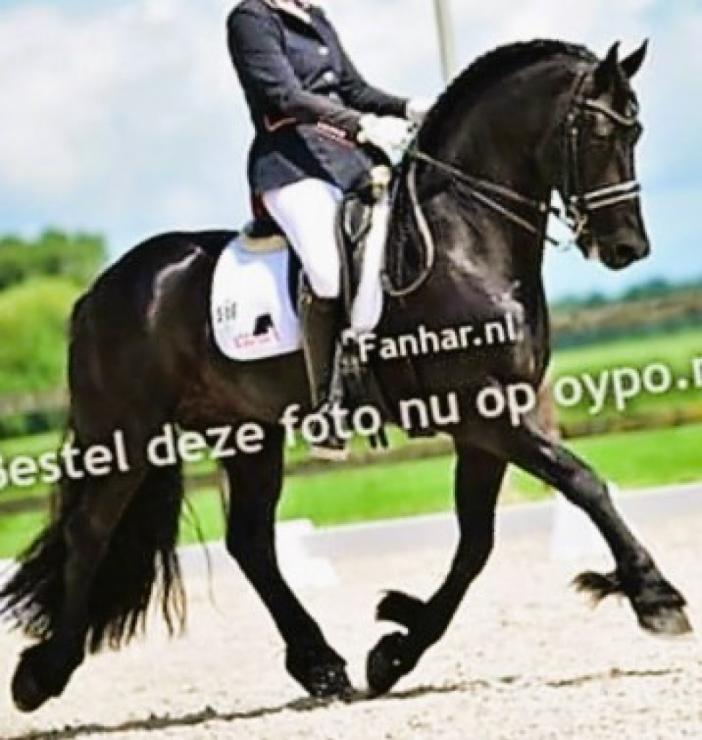 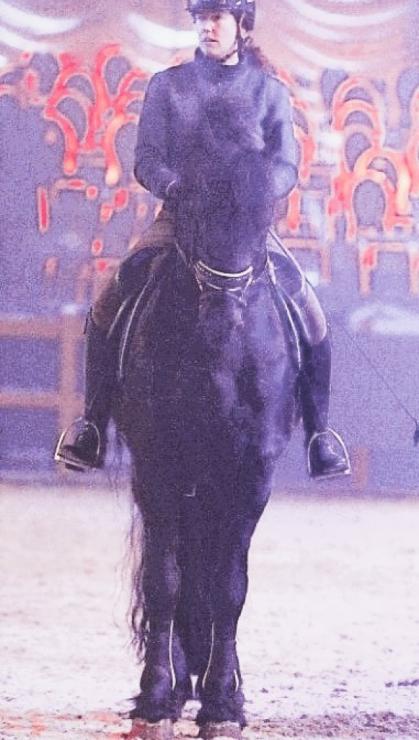 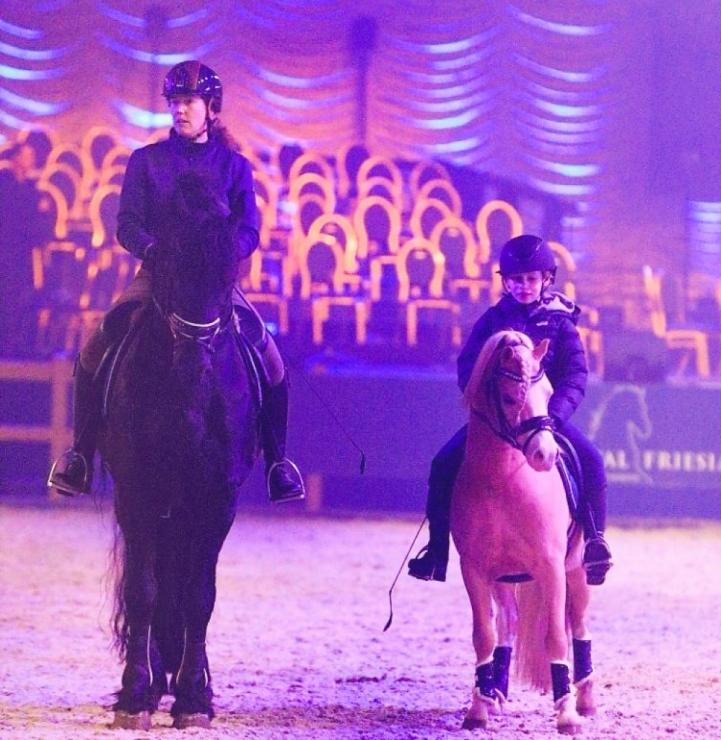 Can Do 3 Tempi Changes in His Sleep & VERY Safe!!!

Performing an Exhibition at the Stallion Show. This SUPERSTAR WON'T LAST!

Pucci is ONLY for sale because his owner had twins and is too busy to have such an amazing horse right now.  I met Pucci's fabulous owner when she spent a year  living in KY with my trainer, Marilyn Macfarlane, and i KNOW what a fabulous dressage foundation Pucci has because of THIS woman!!!! Pucci competed in both the Dutch and Friesian National Championships, and ALWAYS finished in the TOP 5.  He currently has 2 winning points in ZZ Zwaar, and then her baby's came along...and hence YOUR opportunity to own this SUPERSTAR!!!

This is a once in a lifetime horse that has SOLID FLYING CHANGES, is reasonably priced, excellent radiographs available for review with your vet, is actively competing in  ZZ Zwaar in Europe, which is equavalent to our PSG/5th Level (except we don't have 5th level), AND is safe enough to hack your grandchildren around!

Success in the European show ring is no small feat. Most tests have at least 30 competitors. For the Dutch program there is a point system. In order to move up a level in the Netherlands a rider must earn at least 10 points. To earn one point, a rider must have at least a 60 percent, for two points, a score above 65 percent and for three points, a score above 70 percent. Alternatively, a rider can also lose points. If a rider scores below 50 percent she/he will lose a point. As the score gets lower, the number of points lost increases. If a rider loses 10 points, she is forced back to a lower level. The U.S. system is much more lenient. There is no rule in place that enforces a horse to earn its way into a higher level.

As we compare tests among the countries, one unifying theme in Europe is that the level of collection required in the lower levels is slightly higher than in the U.S. For instance, in Level Z for the Netherlands, the 8-meter circle has already been introduced. It isn’t until Prix St. Georges that the 8-meter circle appears in competition in the U.S.!!!

Half canter pirouette in Level ZZ for the Netherlands is another example of the European systems testing for more collection at lower levels than the US. Although a higher level of collection is more imposing, it could be argued that it is better preparation for the demands of the upper levels.

In Prix St. George begins the elite levels of dressage tested at international horse shows. Horses must be at least seven years old before performing at Prix St. Georges (please dont call me and ask for a 6 or 7 yr old Grand Prix horse---ain't gonna happen!). All of the movements required at previous levels are tested, plus the volte (turn) in an 8 meter circle at the trot, as well as the halt from the collected canter.

**** Pucci is doing 8 meter circles and 3 tempi changes (every 3 strides) in competition!

RARE for a Friesian, and even MORE RARE for an 11 yr old and not just STER and SPORT, but also has the SWEETEST, KINDEST, most gentle nature and people oriented temperament---watch his video above where 11 yr old Ella stands on him, after her ride!

Pucci measures 167 cm, which is 16.1 3/4 hands and has AMAZING papers.  His motherline is impeccable:

Pucci has the Same Mother as the World Grand Champion Approved Stallion, Tsjalle 454!!!

He is a REAL "Fabe"  which means he really takes after his famous father, who is known for having offspring with GOLDEN characters that excel in dressage.

Fabe knew how to present himself, and was known for his extremely powerful movements and his character was terrific. Fabe was a real gentleman who stayed calm and undisturbed when he worked and had very polite manners. Everyone at the stable describes Pucci as a "REAL Fabe", because he behaves and performs just like his famous pappa!!!

Want to go on a trail?  No problem for Pucci, he has MUCH experience hacking out and going to the beach.   Want to get your USDF Gold Medal one weekend and have your grandchildren ride your friesian the next? Also NO PROBLEM for this 11 yr old gorgeous friesian dressage horse for sale.

Only problem, you will have to buy him QUICK...Pucci is performing at the Stallion Show in January in an exhibition, and this schoolmaster with a heart of GOLD WILL NOT LAST at this price!!!