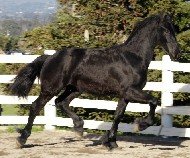 Boreus is a son of the  new, young approved stallion, Felle 422,  by Lolke (a very good Oege son---hint: HAIR gene!!). Felle is out of a Star Preferent Mare by Gerlof. He has a beautiful long neck and excellent conformation, and has passed these traits on to his fully papered son, Boreus!

Boreus is an absolutely gorgeous Felle son. And his incredible pedigree doesn't stop there....
His mother is a STER mare by  the ONE and ONLY, Tsjerk 328!!! Tsjerk is an outstanding Friesian stallion - one of the most POPULAR in Europe. His offspring tend to be "hot" but manageable that are often beautiful, and Boreus is no exception.  Tsjerk  has a track record of producing Approved stallions, and he now has 3 approved sons: Maiko, Andries, and Hinne.

Boreus has that perfect Felle long, elegant, look at me, upright neck set. His sire, Felle, is over 16 1/2 hands tall, and Boreus will likely be even taller. Great conformation. Short backed with an exotic chiseled head and great hair length. And BOY CAN HE MOVE!!! This boy struts his stuff, just like Tsjerk, Tsjerk's are known for INCREDIBLE movement!!!:) When Boreus moves... everyone watches.

He definitely stands out in a crowd. He has great bloodlines and is out of a tall STER mare.

This is one hard to find, reasonably priced, IMPORTED FROM EUROPE, excellent STALLION CANDIDATE!!!!

Boreus has already been microchipped and registered. Boreus's birthday is Mar 10, 2007.

Boreus has an incredibly strong hind end (which is exactly what Tsjerk's are known for). He has been handled daily and he has excellent basic ground manners. He has a good mind, and is shedding out his baby fur, and is showing his true jet black shiny coat.

This colt surprised me with his movement in Holland. Tail up and very good extension when trotting!

Comes from a HIGHLY productive stam line, stam line 44. This line has produced NUMEROUS approved stallions, such as :

So obviously this colt has an OUTSTANDING pedigree, and the movement to go with it, making him an EXCELLENT STALLION CANDIDATE.

Boreus has just  ARRIVED FROM EUROPE!!!!