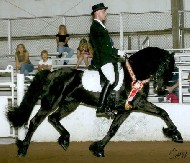 Here is what Jip's trainer has to say about this phenomenal show horse.... "I took Jip to a big show and drove him in front of the buggy to see how he does on a show. The people thought that i had an Approved stallion in front of the buggy. Last Friday Jip won again on a dressage show with 204 points. He got an 8 for the trot, a 9 for the canter and a 7 for his walk, and he is now selected for the finals in Kootwijk. He is in the lead with 9 points more than the second place horse.
Not only is he good at dressage, he kicks butt driving, and he was selected to show at the Central mare keuring in Leeuwarden.
LOW 1/17% in breeding
1st Premie!!
B-Day 6/4/03

The last mare in the line of Jip's pedigree is the mare where this line started. Jip comes out of one of the latest lines. This line is also one of the shortest lines.Jip is well known in the Netherlands and very famous about his movements.When Jip was only 2 ½ weeks in training, he went to his first dressage show. Jip had to compete against 80 other horses and he was the only Friesian! Jip won the first class with 193 points and the second class he went in, Jip scored 204 points; actually he had 209 points but he got minus points because we made a mistake with reading the wrong test..... but in both tests Jip was number one!

The second show Jip went to was the same thing! Twice he won first place with 194 and 199 points.

Jip is a horse that the longer he goes, the better he gets.

Jip completed his first show season with only first and second places.

Jip will compete on the 22nd of September at the Dutch Championships and he is one of the favorites there! On this moment he has only 0.2 points less than the horse in the lead.

Jip is not only a showboy under saddle, in front of the buggy he can give you goose bumps too! When you see Jip moving, he shows really who his daddy is! The movement of Jip will remind you of horses like his father, Jasper.

Driving:
Jip is even famous in Germany, we were asked to give an exhibition with Jip at a big show in Germany. Jip  presented how a real Friesian horse should move in front of a Friesian Sjees. Just take a look at Jip in front of the white Sjees, those pictures were taken in Germany at the show with a Friesian ( Jip), a Hackney (the most winning Hackney Horse at this moment) and the champion Dutch Harness horse. The Judges placed Jip FIRST!

We aren't the only ones that like this horse, here are the comments of the dressage judges at the Nationals:

This is a one of kind friesian that will be a REAL star, for his lucky new owner. We will continue showing, and accumulating wins, with Jip (on the west coast), until sold. This is a horse we are PROUD to own and show!!!! He is a WOW.

***DVD available of Jip's dressage tests from the IFSHA World and National Championship Horse Show in St Louis, Oct 4-7, for $30. Please send your check to the address listed under "contact us" if you wish to have a dvd of Jip's dressage peerformance sent to you.***