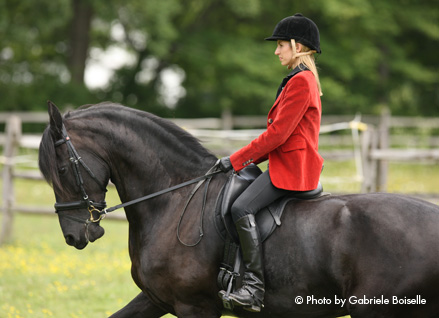 Model Mares are more RARE than Approved stallions [they are the female equivalent to an Approved stallion], and FPS/FHANA Registered Approved Stallions generally start at a quarter of a million dollars....which makes Primadonna a STEAL!
First time EVER offered on the market, this RARE RARE RARE fully papered 7 yr old Model Mare, Primadonna, is not only a show stopper, she is about to be a momma, AND she is still WINNING, as evidenced by her placings at last weekends competition!!<,br> Primadonna has success in her genes. She was born on May 25, 1998, and received a 2nd premie as a foal. She was taken to a keuring as a 3yr old, and she received the highest honor possible, only bestowed on the top 5% of mares....she became a 1st premie STER mare. But her success didn't stop there, Donna went on to win the coveted Silver Whip title two years in a row, and again was Judged at the mare championship in 2004, and not only did she receive yet another 1st premie STER title, she became one of the very few and ELITE, she became a MODEL mare!!
Primadonna measured a full 16 hands as a 3yr old, and is even taller now. She has unbroken ster predicates in her motherline, and is what they call "fully papered" because she is out of a STER mother, her grandmother is STER, and her Gr Grandmother and Gr Great Grandmothers are both MODEL [like Donna] AND Preferent, indicating that not only are they considered the top of the TOP, they are also PRODUCING the BEST, and have had 4 or more STER offspring.
Primadonna is a TOP dressage horse, as proven by the 4 points she has earned in competition over the last 5 shows. Even though she is due to have a foal fathered by the exceptional Approved stallion, Fabe, in June, Primadonna was in the top 3 in every single class she entered at last week's competition. This is one HARD WORKING mare with a heart of gold!!
Donna is an excellent mother, as exemplified by her 2 previous offspring, a Feitse-Pref filly in 2002, and a filly by Fabe last year. She stems from stam line 103, 6th generation. This line is very productive, and has produced the folowing Approved stallions: Hotse 223
Liekele 364
Jelte 365
Tsjitse 387
Teade 392
Tonis 393
Botte 414
Arjen 417

Fabe, the father of the foal that is in Primadonna's belly, is a beautiful stallion from the small Age line, known for its performance genes. Fabe has been approved on offspring in 2001, with a great offspring report. He produces offspring with a strong topline, a beautiful blueblack color, and thick feathers. His offspring is also noticed for their excellent gaits, especially the powerful, rhythmic trot and the nice way the horses carry themselves (with very good use of hindleg). The percentage of his offspring that has received the Ster predicate is higher than what is average for his age group. The "white %" of his offspring is extremely low, another great trait of Fabe. Fabe is the sire of Sape 381, the 2001 Champion Stallion and 2002 Reserve Champion Stallion. He also is the sire of Tije 401, approved in 2002. Fabe adds more height and performance potential to Primadonna's already tall elegant frame. Fabe's sire is Melle 311, the FPS approved stallion that performed at the highest level in dressage. He showed very succesfully at 4th level (Z-2 dressage) and was Champion Stallion in 1996. Fabe's dam Kee Ster is a daughter of Romke 234, the wellknown performance stallion.
Donna has great charisma and loves to show off her extraordinary gaits. She has excellent conformation, with a femine face, and tall, elegant build. This gorgeous MODEL mare has great ground manners, and she very much enjoys being handled, showing and being surrounded and handled by "her" people. All 3 of her gaits are powerful and elastic, and she dances around like a ballerina when under saddle, and she seemingly floats off the ground, when puling a carriage.
If you are looking for the BEST of the BEST, there is no Model mare on earth quite like Primadonna....she is very special, and she knows it!!