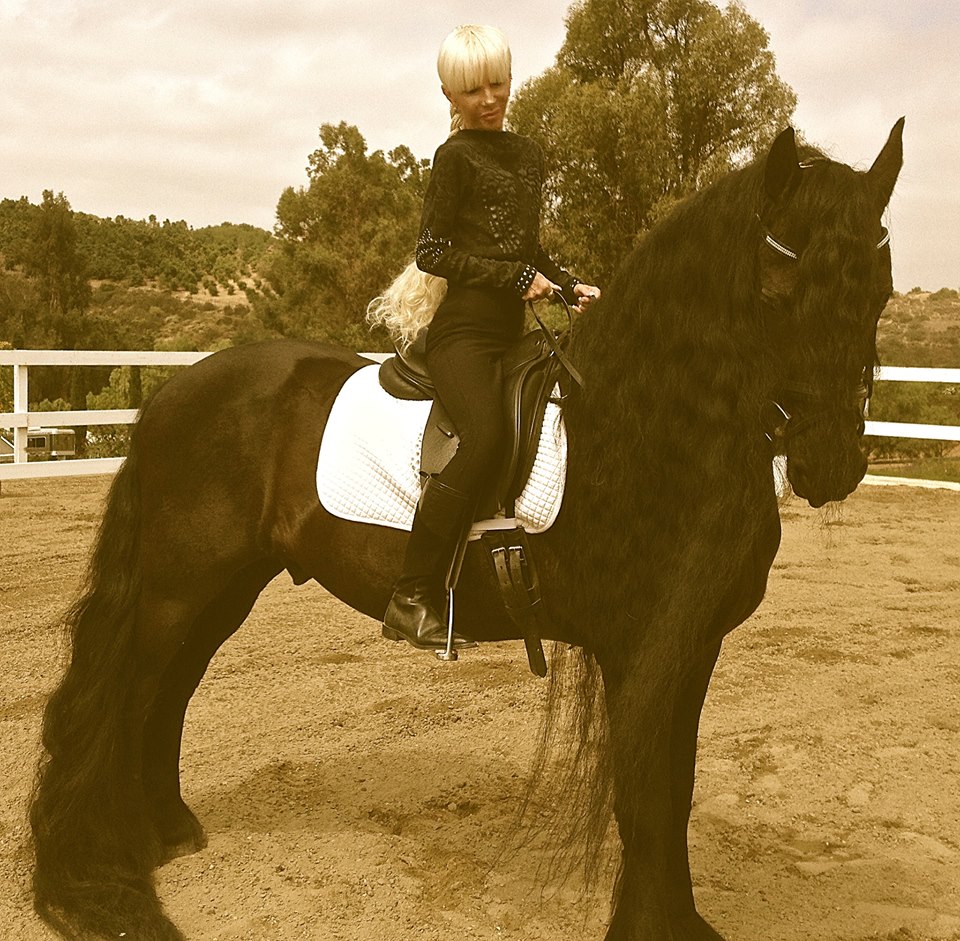 Majestic is one of our own “keeper” horses we RARELY offer for sale. Majestic, our VERY BEST OF THE BUNCH, is up for sale to a lucky new buyer!

He was imported in Feb of 2004 from Denmark. We searched all over Holland for the very BEST friesians to import, and the best one we found was located in Denmark! Since we cannot pronounce his registered name [Up-t 'fan Panhueys], this gorgeous boy’s barn name is “Majestic”.

Majestic is a rare fairytale STER Gelding. He was selected as an FPS/FHANA provisionally Approved Stallion at the Sept 2004 keuring [see the story on our website], and became a STER stallion and Champion Stallion of the keuring, and was headed to the Central Inspection, until he fell ¼ of an inch too short of the FPS/FHANA height requirement (Our loss is YOUR gain!).

Majestic is now a gelding and has an enviable show record, winning blues at every single “A” USA Equestrian Show he has attended, and holder of four current world and national championships!!!!!!!!!!!!! And this is one VERSATILE boy, he wins every Dressage  class he enters. This gorgeous  STER Gelding is just about unbeatable. His hair touches the ground!!!!!.... the audience goes absolutely WILD for this long haired fairytale horse, with a heart of gold.

With Majestic’s laid back style, he can be ridden by ANY level rider---even a timid rider that has had a bad experience previously. This long haired beauty has quite a fan club coming to pet him after each class at shows.  Majestic is always the CROWD'S favorite!! AND Majestic always leaves with roses around his neck, a long tri-color ribbon hanging from his bridle----- this is one rare schoolmaster that wins in EVERY division.

What a cool EXHIBITION horse, too!!!! To show his versatility, Majestic wowed the crowds and put on an incredible exhibition with another Friesian stallion we owned at Dressage in the Wine Country.

Majestic has already won everything on the west coast, and is reaady to be someone's DREAM horse!

Majestic is a REPLICA of his daddy, the #3 performance producer in the world, Anton, who reportedly sold for 2 million euros when imported. Majestic’s mane literally DRAGS the ground. Majestic has x-rays taken in feb 2008, and is ready to win for you.

Majestic is a once in a lifetime friesian, rarely available, with an unmatched show record indicating not only is this boy gorgeous, he can PERFORM, and WIN. The Judges, and audiences LOVE him.

This boy ready for 3rd level, doing all 3rd level exercises, very confirmed trot and canter half passes, travers, shoulder in, turn on haunches, walk pirouettes, simple changes, counter canter, and so on. He is even schooling flying changes.

Here is an excerpt from the story on the keuring where Majestic was chosen as a provisionally approved stallion!

"Wow, The Unthinkable Happened for 30 Minutes...Champion Stallion of the Keuring, and MORE! We attended to the keuring in our area today, and brought our 6 yr old Anton X Nykle stallion, "Up-t fan Panhuys' ( barn name: Majestic), for approval. Janna had been showing him all season with much success, but we figured we had no chance at having an Approved stallion. 3 stallions were entered for "3+ Stallion for Ster or Central Proving" and Majestic went last. We were SOOOO nervous, as it was out of our hands. It is a feeling that we are not accustomed to, that is having our best horse in the arena performing without one of us on his back! The feeling of apprehension, curiosity and excitement built as Majestic showed his wonderful attributes to the judges at the keuring as he walked and then trotted, as if floating, around the arena. It all happened so quickly with the Dutch judge first admiring Majestic in the middle of the ring and then asking to see his papers. Majestic literally floats when he trots, and we knew something was up when the Dutch Judge asked Janna to come into the ring with his pedigree. He talked about his dam, and then whispered that they were recommending he be sent for the 70 day stallion testing, he was on his way to becoming an Approved Stallion!! We couldn't believe it!!! What this happening? Could it be? Is Majestic one of the very very few who will be chosen to compete for the gold ring of Stallion Approval? The answer became clear as Janna was asked to speak with the Dutch judge who commented that Majestic had no flaws but that he would need to be measured and then his semen and x-rays assessed, before he would enter the next phase of Stallion testing. The American judge congratulated us. It all seemed so surrealistic. Majestic had made it!!! The toughest step had been taken. We were on air, ......for about 15 minutes. As we walked away from the arena with our Majestic black stallion in tow, we were floating. Then, we put Majestic first in line to be measured, and couldn't believe it when the same Judge said, "sorry,  he doesn't qualify because he is not tall enough. SORRY!". Boy, what a whirlwind of emotions! We thought for Majestic clearly was tall enough.....The rickety measuring stick which looked like it belonged to the Dutch judge's grandfather was unfolded and the Dutch judge struggled to hold it in place....and three times the proud boy was measured, each time coming up about 2cm short. How could this be!!!! There must be a mistake....but as the air escaped from that balloon of elation, we realized that our wonderful Majestic was a tad bit short of the mark!!! The Dutch judge apologized and said that since Majestic was six, there was no chance for further growth and so the stallion approval testing for Majestic ended there....2 cm. short. So, the excitement came, and went, but he WAS named champion stallion of the keuring, and we love our Majestic anyway. Needless to say, it was a very exciting day and we thank the judges for their fine work, and we can't wait to WOW the same Dutch Judges with Majestic under saddle, competing at the IFSHA Grand Nationals :) Congratulations to Majestic! - Ron Goldmen