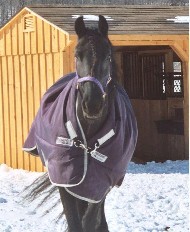 This is ONE SPECIAL and RARE Ster Mare!!! Helena's dam, Helina-Ster+Preferent, is a FULL sister to Anton's Dam. She was bred by Anton's owner and raised in the same stable with Anton for her entire show career in Holland. For those of you just learning the bloodline "ropes" of friesians and wanting a TOP NOTCH Friesian mare...Anton was ranked the highest for offspring performance last year and sold, reportedly, for a record sum of 1.2 million euros, during the 2004 Stallion Show. You can't get much better than having a mare that is a full sister to the mom of the hottest Approved stallion to recently be imported to the US!! It doesn't stop there...Helena's motherline is TO DIE FOR. It is NOT just unbroken ster predicates, her dam is STER+PREF, her grandmother is STER+PREF, Great Grandmother is Model+PREF, and Gr Gr Grandmother is Model+PREF. The STER predicate indicates the mares are considered the top 15% of all mares for their conformation and movement. The PREFERENT title is even more indicative of what kind of babies you can expect from Helena.
Preferent means every single one of her predecessors has produced at least 4 STER offspring!!! This is the kind of pedigree the Dutch Judges like to see in APPROVED stallions.
Helena is a PROVEN producer. She has had 5 foals...a Rypke daughter that was champion of her keuring and became STER with a 1st premie!! She has a Feitse son that was twice at the stallion show in Leewarden and sold for a large sum, and went to Germany.
Helena is from stam Line 50, the best Dutch breeding-line and that from which the most approved stallions come!!
And that's not all....Helena is the highest level dressage mare we have ever offered!! This pregnant momma has been competing and WINNING against warmbloods, in M2 level competition [translates to 3rd level in the US] and is ready to begin Z level. AND we really think this mare has the talent to go even higher!!! Helena is a proven top dressage competitor, and imagine where she would be if she hadn't taken time out to have those 5 foals! It is said that the QUALITY of a Friesian mare is in her MOTHERLINE-and the ability of that motherline to pass on superb traits and characteristics, not in the sire's line. Helena's motherline obviously produces TOP TOP quality offspring, her very own mother being a full sister to the dam of an Approved stallion. You can't get a much a better producing motherline than one that is producing Approved Stallions currently, and Helena is only 11 yrs old, which means she has 15 productive years left to produce champions. Helena's babies could very well be Approved Stallions for YOU! She has a tall 16 hand frame, a LOW .78% in-breeding co-efficient, points in 3rd level dressage competition, and she represents what is desirable in a Friesian sporthorse TODAY, not the old clunky types of yesteryear.
For those of you looking, and never finding, an UPPER level dressage mare with POINTS to prove her ability, this is a no-brainer, AND she will give you a beautiful foal due April 11, 2005. And for those of you looking for the BEST of the BEST to begin your friesian breeding program, this is also a no-brainer. We believe Helena IS the best producing, best performing, best pedigreed mare on the market anywhere.