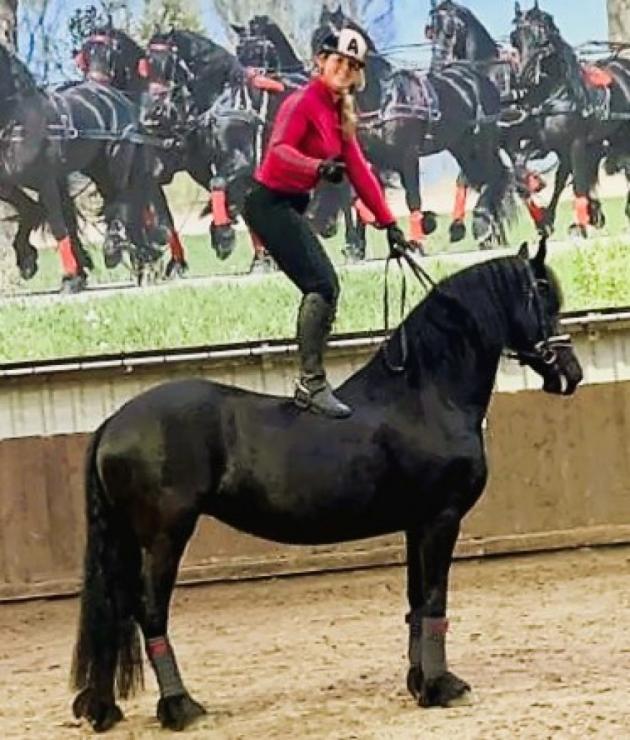 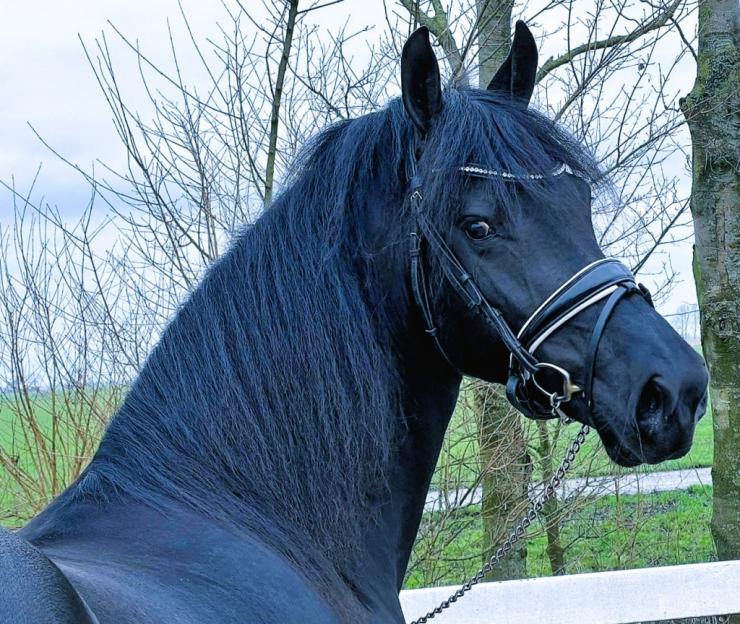 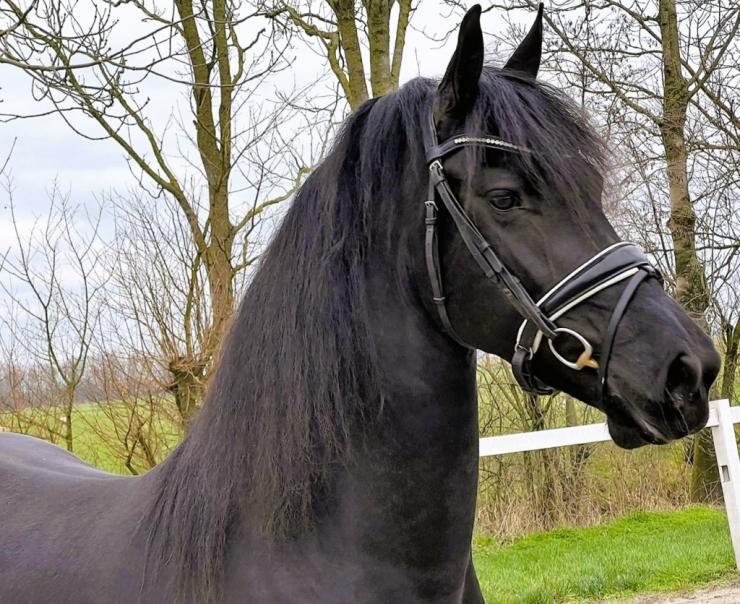 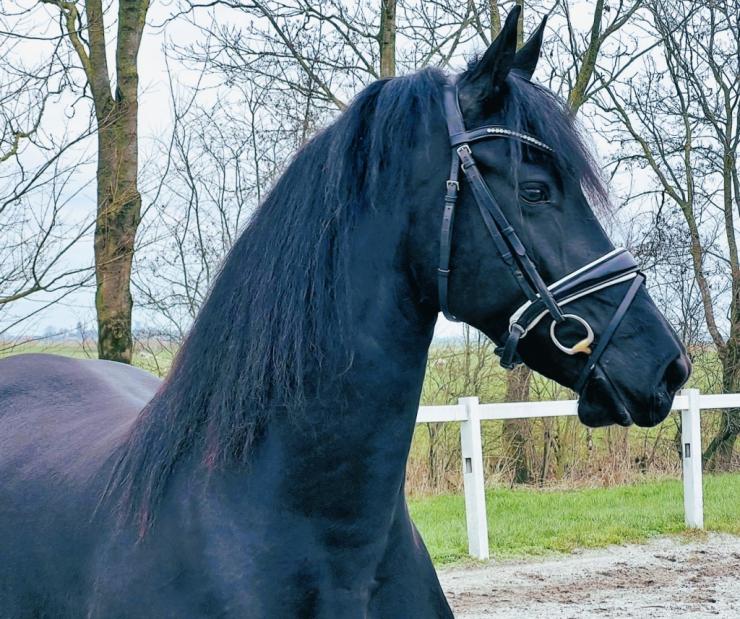 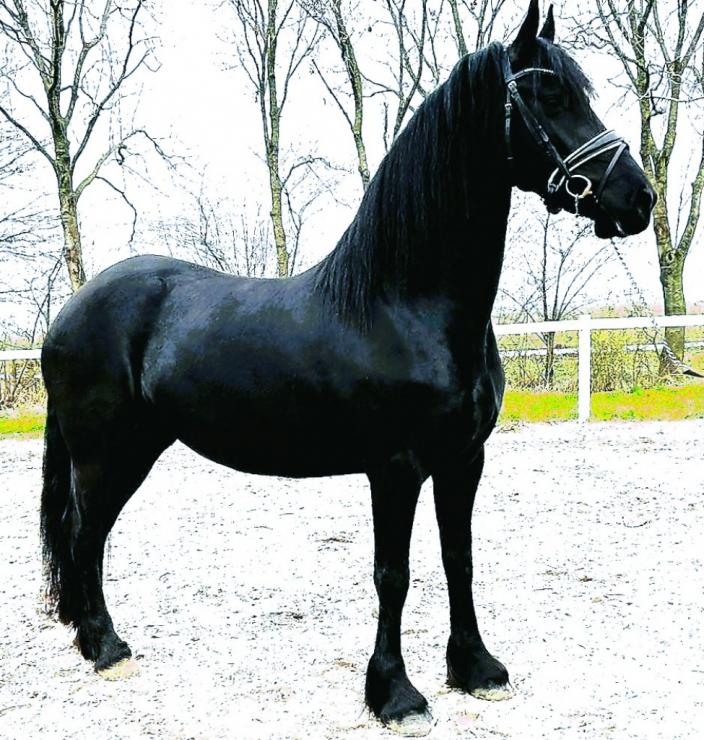 Check out the new young pregnant 16 hand friesian mare for sale, Layne!!  Layne presents an excellent INVESTMENT OPPORTUNITY, as she is  confirmed in foal to WORLD GRAND CHAMPION, Matthys 504, with a foal due Apr 15!!

We fell in love with this beautiful AND well mannered mare when in Holland...she is pregnant, and she still enjoys going for a ride!!!! Here is an unbelievably nice Friesian mare for sale, with a pedigree that is second to NONE!  She is out of a KROON AA mare, grandmother is STER, Gr Grandmother is PREFERENT, and Gr Gr Grandmother is STER!  You cannot find a motherline so impressive ANYWHERE.
Layne is a 4 year old jet black Mare that is very well trained to ride and drive, and a RARE opportunity to own one of our BEST pedigreed mares, that is already 16 hands, AND STILL GROWING. If you want one of the BEST to start your breeding program, Layne is IT. The icing on the cake is the fact that she is sold  in foal to the incredible Approved stallion,  Matthys, a strong and powerful stallion,  thus a great 2 for 1 package.

Layne is a daughter of the GREAT Eise 489 SPORT ELITE AAA. Eise 489 has  succeeded four times running to be the best stallion in a class with a four-wheel show carriage at the CH Lunteren competition with the best of the BEST. At Eise's presentation in Leeuwarden another title was added: Horse of the Year for 2016. In 2016 the 8-year-old Eise 489 was the revelation of the show driving season. In impressive style Eise 489 won the Championship Honorary Class in front of the sjees, later adding the title of Champion of the Studbook Stallions. I was there to witness Eise at the Stallion Show that year and to the elation of the audience, Eise's trainer had hitched up Eise 489 to the sjees, driving his lap of honor with stunning flair which was met by a wildly enthusiastic round of applause, as he was honored as HORSE OF THE YEAR! His offspring can be characterized as ‘pleasant and happy horses', with a good attitude as a sport horse, the right willingness to work as well as perseverance. Eise 489 was  rewarded with permanent approval by the KFPS in 2019 because of his convincing breeding results.THIS year at the stallion show in Leeuwarden  Eise 489 twice  performed in the FRIESIAN PROMS. On Saturday afternoon the 14th of January he also entered the ring for a show presentation in the long lines in between categories, and the crowd AGAIN went wild for this WORLD CHAMPION, and Horse of the Year.  Layne has inherited her ideal conformation and incredible temperament from her daddy.

Layne's dam 's sire, MINTSE 384 (now deceased) is NO SLOUCH either. . Mintse was the 2005 KFPS World Grand Champion Stallion. His legacy lives on in his 2 approved sons Tsjalle 454 (3 time KFPS Reserve Champion Stallion) and Date 477 and also his grandson Jehannes 484 (2015 KFPS World Grand Champion Stallion). He was later imported to the US where he was the first approved breeding stallion to ever hold the “Sport” predicate in North American.  Mintse traveled throughout the United States to many FHANA sponsored events including the Friesian Extravaganza and being part of the 10 stallion Friesian Train at the World Equestrian Games.  We have no doubt Layne can accomplish great things in dressage, due to the talent and work ethic she has inherited from her incredible parents!

And you need to buy her SOON, so we can have her transported to you and she can adjust to her new surroundings, and YOU, before she brings you your SECOND friesian!!! Do the math....this mare is a GOOD BUY, if you buy her NOW, as there are very few Matthy's foals in N America, so her first foal will be worth A LOT!
You will have a foal by one of the hottest newly approved stallions in Europe! In 2020, Matthys claimed the Champion Title for Younger Stallions. Matthys 504 has not only won the Championship for Younger Stallions but also landed the Title of Overall Stallion.
Layne comes from stam line 1, and has a very low 2.73% inbreeding co-efficient, which means you can beed her to just about ANY stallion.

She has marvelous gaits, outstanding conformation and a very good disposition. Start your breeding program with this adorable friesian horse for sale. Layne is currently in excellent shape, ridden by both advanced AND beginner riders. She could be  a top dressage horse for you, she has INCREDIBLE movement!!! Not many pregnant mares are this well ridden under saddle. Super super sweet and safe mare!!!

Layne is a deep black color and has a very nice mane and tail. If you are looking for a TOP friesian mare, and one that is also pregnant, and an excellent VALUE, Layne is for YOU!