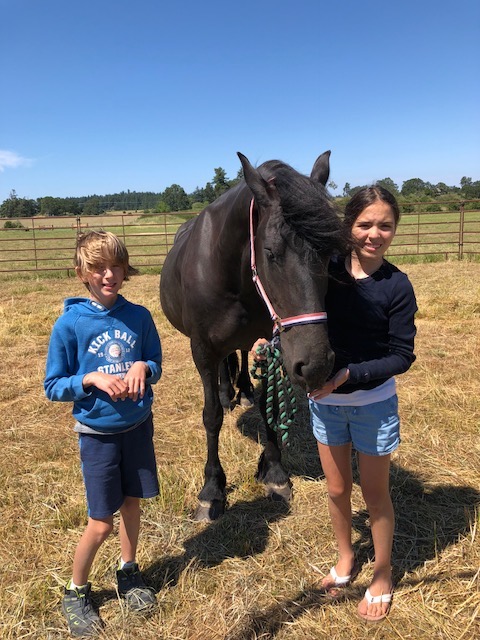 You cant beat the pedigree on  this studbook mare:

For those of you just learning the bloodline "ropes" of friesians and wanting a TOP NOTCH Friesian mare, this TOP NOTCH pregnant mare is sire by NORBERT 444, Grand Champion of the Stallion Show once again in 2014. Time and time again we are awed by his magnificent and elegant appearance, in combination with his powerful trot.... And her dam's sire is Beart, who was ranked the highest for offspring performance and more than once WORLD GRAND CHAMPION, of all approved stallions, at the stallion show in Leeawarden. It doesn't stop there...Namke's motherline is TO DIE FOR... unbroken ster predicates, her dam is STER, her grandmother is STER+PREF, Great Grandmother is STER, and Gr Gr Grandmother is STER+PREF. The STER predicate indicates the mares are considered the top 15% of all mares for their conformation and movement. The PREFERENT title is even more indicative of what kind of babies you can expect from Namke. Preferent means every single one of her predecessors has produced at least 4 STER offspring!!! This is the kind of pedigree the Dutch Judges like to see in APPROVED stallions.

And that's not all...Namke is wonderful under saddle, not lazy, but also not spooky! This pregnant momma is REALLY great in traffic and on trails---AND we really think this mare has the talent to be a nice dressage horse for an aspiring dressage rider.

This Studbook mare is far above average!! It is said that the QUALITY of a Friesian mare is in her MOTHERLINE-and the ability of that motherline to pass on superb traits and characteristics, not in the sire's line. Namke's motherline obviously produces TOP TOP quality offspring. and Namke is only 6 yrs old, which means she has 15 productive years left to produce champions.   She represents what is desirable in a Friesian sporthorse TODAY, not the old clunky types of yesteryear. For those of you looking, and never finding, a dressage mare, this is a no-brainer, AND she will give you a beautiful foal later this summer. And for those of you looking for the BEST of the BEST to begin your friesian breeding program, this is also a no-brainer.

Namke is a tremendous BUY! And a half brother to the DROP DEAD GORGEOUS Jack Black!

This is one of the last pregnant mares we will import this year, Namke is $32,900 INCLUDING import and quarantine.

Let us know right away where you prefer your new pregnant friesian mare to fly into?