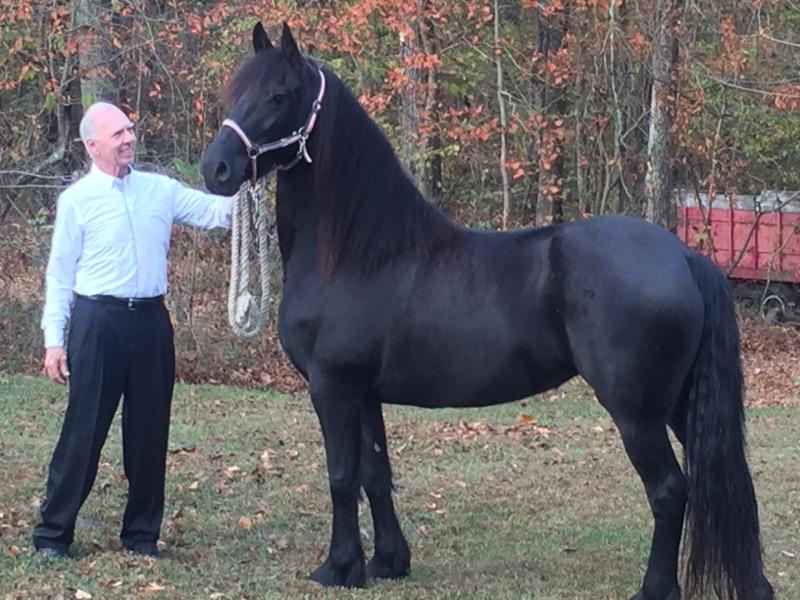 Jikke is our new FULL PAPERED sporty pregnant mare out of Ulke SPORT; and sired by the REIGNING WORLD GRAND CHAMPION, Tsjalle!!!! She is a WOWZA!!!!! ....her springy trot, terrific knee action WITH power from behind! An uncommon combination...

Jikke's sire, Tsjalle, has earned the distinguished and rare SPORT PREDICATE, which means he has achieved great scores in dressage competition. Jikke's dam's sire, Ulke, has incredibly high scores in both trot and canter,and ALSO earned the coveted SPORT predicate!!!! ....making Jikke an outstanding prospect for dressage, or show driving. Of course, most Friesians also make great trail or family horses, too.

Incredible REASONABLY priced 2 for 1 pregnant imported mare, out of THE coveted Line 50 breeding lines. The top Friesian breeding line-that from which the most approved stallions develop. Dam is STER +PREF5. Grand Dam is MODEL (a MODEL title is equivalent of being an approved stallion, in female form) and the great grand dam is STER Pref 8. DOB: 4/27/11.

This is NOT just any ole broodmare.... Jikke RIDE AND DRIVES, and not just "broke"....she  is really a well trained mare that is NICE to ride and drive!!!

AND she is a proven producer, having had 1 foal previously.

If you are looking for an amazing 2 for 1 deal on a TALL, long legged elegant, GORGEOUS mare, that LOOKS LIKE A STALLION, don't miss this TALL 5 yr old mare that has a pedigree to DIE for!!

She is 14 weeks confirmed in foal to the HOT newly approved stallion, Fonger 478, and comes from the GOLD STANDARD stam line 50----don't wait on this one, or she will be gone.  This is a GREAT mare, who JUST ARRIVED FROM EUROPE! Jikke is located in Paris, KY, finishing up her cem quarantine at Marsetta Farms. AND Jikke was confirmed in foal again on Sept 19th! In short....GREAT, long  legged, tall, sporty mare, that is fantastic to ride and drive, and will give you a foal sired by an approved stallion only available in Europe, in the spring. Offered exclusively by Janna at 415-272-2112.