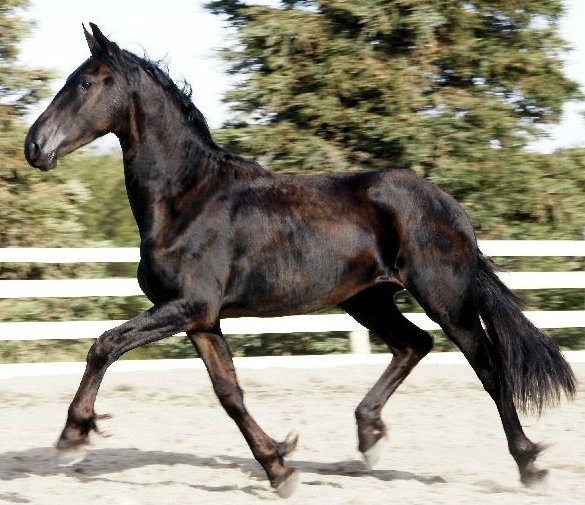 -Attended keuring in September, 2009, where he received a 2nd premie

-sired by the approved stallion, Anne

The most amazing thing about D'Artagnon is his incredible movement! He literally floats above the ground with a lightness that is pure beauty in motion!

His long legs produce a long, elegant stride and his extremely active hind end gives him enormous natural propulsion. As a dressage rider, I am very excited about this stallion! Aside from his Ster/breeding potential in the Friesian world, this is a stallion that will have the movement, conformation and the mind to excel to impressive levels in the dressage arena!

D'Artagnon is a son of the approved stallion, Anne. Anne's mother-line is comprised of star/star preferent, model/model preferent which have been known for their performance and fertility. Approved on his offspring in 2000, Anne is noted for producing a luxurious horse with a beautiful head, great extension, strong impulsion and a fantastic trot. Anne's ability to pass on this combination of performance excellence and stellar character made him a top breeding stallion in The Netherlands.

Anne was third overall at the stallion show in 2000. He also earned top honors in his class besting the stallions, Teunis and Tsjerk. Anne is an intelligent stallion with a tremendous presence. He is a top level dressage competitor shown with great success by Sabine von de Kolk.

Looking for a reasonably priced friesian stallion, already registered and microchipped?  D'Artagnon is your man,  and he is already 17 months old, and priced like a weanling:)