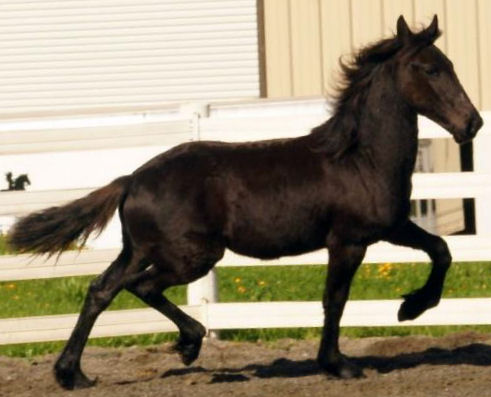 Refined and modern and a gifted mover!

Yes, excuse me, i HAVE shed out my baby brown fur, and am  a very jet BLACK friesian!!

Out of the beautiful mare, Lilly of Shady Nook Farm (pictured on 2nd page of photos), this is one STER stallion in the making:). Lilly is of the van de Zuiderwaard breeding program in Holland and we are quite familiar with the status of this line, as our beloved Stormy Seas [Ronald van de Zuiderwaard] was also a product of this incredible breeding line--and Stormy won numerous world and national championships for us, both in riding AND driving!! Doeke's sister was awarded Champion filly at her keuring as well.

Doeke is a magnificent mover and is modern and athletic. Certainly he is very correct in structure and his disposition is pleasing as well. Not only does he stems from the van de Zuiderwaard line, he is suitable in disposition for a youth or amateur and will make a very nice riding/driving stallion. His bloodlines are rare in the US and he will be superior if used for breeding. Yes, it is in the Zuiderwaard genes.

Doeke has the sport horse build of his dam. He has a very spirited nature and a beautiful upright trot. This is one extremely nice 1st premie colt!!!

His sire, Mintse, has the Sport predicate behind his name. The sport predicate is earned when the horse has proven himself as a superior horse in competition. Not only must the horse achieve a high level in sport but he must also win at a high level consistently. Mintse has earned this predicate in dressage, competing and winning at Z2 dressage in the Netherlands. Mintse has also been the winner of the Silver Whip, a special award given for success in the dressage arena. In the Netherlands Mintse was very successful as a show driving horse, wowing both the judges and the audience with his amazing trot. Mintse is the highest rated stallion in North America for improving the trot on his offspring. Mintse is also the highest rated stallion in North America on "Sportability" of offspring. Mintse's offspring have been rated for their ability to do well in sport and there is not another Friesian stallion in North America who scores higher than Mintse at having offspring that have the potential to be top quality sport horses. He is from stam 25, 16.1 hands tall, the 2005 FPS World Champion stallion, the stallion with the best trot (FPS jury, 2007 Hengstekeuring), a winner of the Silver Whip, and multiple time winner of the "Zilveren Klomp", an award given to the crowd favorite as the horse with the best trot. Mintse's offspring have beautiful heads, well developed necks, good conformation and demonstrate the same impressive movement as their sire.

You can watch his live birth on youtube. Here is the link: http://www.youtube.com/watch?v=QnG2lNHkXN0

Doeke stems from stam line 2, a VERY productive line that has produced the following Approved stallions:

and the newly approved Take 455

He received his second round of vaccines (rhino-flu-EWV-Tetanus, Strangles, West Nile and Rabies) on 12/15/09, and he was last trimmed by the farrier on 12/21/09. His last deworming was with Strongid on 12/21/09.  Doeke is halter broke, stands for the farrier, picks up his feet and is accustomed to being brushed. He also leads and is accustomed to being trailered....not bad for a 1 yr old stallion!

This is one PHENOMENAL registered Friesian stallion. Want the BEST?!?  Doeke earned a 1st premie and was ranked in the top 5% of all foals, for conformation and movement at the 2009 keuring!!!!