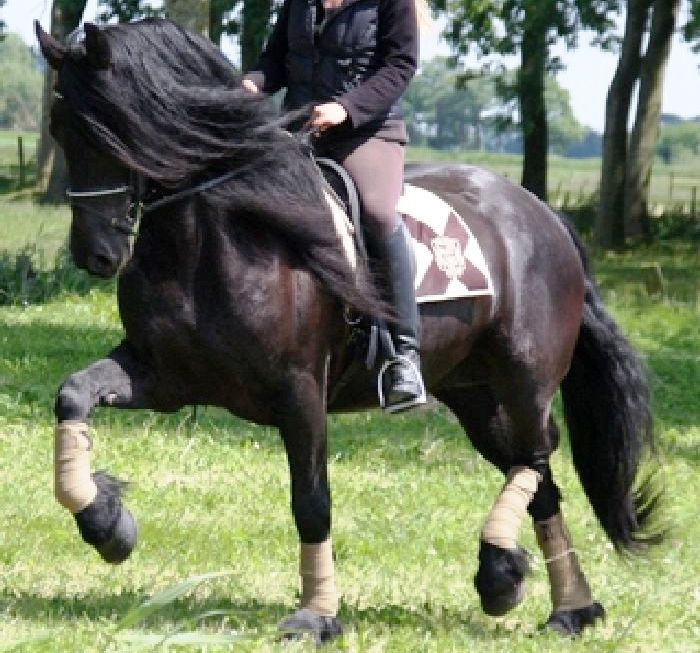 See Videos of Amber (Jildau) Under Saddle at:

Amber is a 3rd premie mare with a full paper  sporting a pedigree that has MUCH preferential and Model blood in it. She is  from the stable of J van Dorp who has had lots of success with his breeding line, and she  is closely related to the approved stallion Thomas 327  (daddy to sale horse, Thurston and our horse, Chopard) .

Amber's mother,  Rinia D.,  is a 1st premium star mare by Ulke, and has 3 star offspring, and thus will likely soon be Preferent!  Rinia's mother is a Model daughter by Dirk. This model mare, Wietske D, achieved an 8 on her show driving test during her ABFP test. Wietske D comes from the double preferent stallion mother Hetske Star + Pref. She is the half sister of the approved stallion, Thomas 327, who was very successful in his sports career during his short life. Hetske Star+ Pref is the mother of Wietske D and Thomas 327. Further on her pedigree there are  5 more Model Preferent mares, which ultimately goes back to the infamous preferent mare, Marianne.

Marianne is the foundation mare for the breeding of the well known "Boszorg" horses, and  the approved stallion Stendert.

Amber had a filly this year by  Jesse (Leffert x Doeke). Her filly has already been weaned, and last year she had a stud colt by Andries.

Amber stems from the famous line 50, which is considered the GOLD STANDARD .
She is not just a great PROVEN broodmare, Amber is VERY well trained under saddle and in harness. In 2008 she competed in several show driving competitions and she ALSO  has been shown  first level dressage, accumulating winning points in L Level.
Amber will give you a Tietse 428 foal due end of March/early April  2010.
She got pregnant from the first and only breeding we did with her, just 9 days after her foal was born, this year!! And it was the same thing last year---she is an EASY breeder,gets pregnant like clockwork on the first try everytime!!
*** Great two for one value!!!***
The 2 driving pictures above are of Amber in a pair and they  are with our show horse, Chopard. Amber is 100% traffic safe!
This is an exceptionally beautiful LONG haired stam line 50 mare with 13 generations of STER or better on her pedigree and a mane that is 1 meter long----something that is RARE to find on a mare!!!!  AND she has winning points in L Level Dressage AND Driving.
-Registered as Jildou