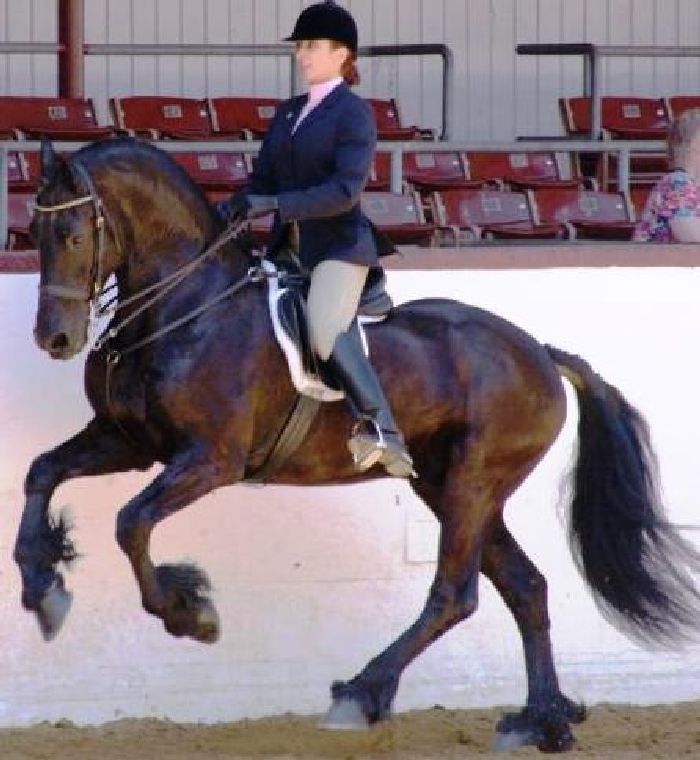 And here are flying change after just 1 week of training them:

Other than the approved stallions, we think Neo was one of the best Friesians  competing in dressage! This boy has talent for high level dressage or maybe even saddle seat competition. Neo is a fascinating fairytale looking 9 yr old gelding competing at Z1 level ( 3rd level) .

He is just under 16.0 hands, and a little bit "hot" under saddle{in a GOOD way}.  This is a TRUE JASPER---- His daddy is now preferent, and a multi titled World Grand Champion, as well as being a well respected upper level dressage horse in Europe. Because Jasper's semen doesn't freeze, the only way to get a Jasper son in the U.S. is to IMPORT one.

Trick Trained to Bow and he also give kisses,  when you say "kusje"

We just had him thoroughly vetted and x--rayed.

Neo has just  arrived from Europe! Come have the ride of your life on him at BSF!!

Neo has the midas touch...everything he touches turns to gold.

And Neo just returned from the Santa Barbara Grand National Horse Show where he was crowned Reserve Huntseat Pleasure Stake Champion with his teenage rider, Julia Goldman!!!!  This boy looks JUST like our stallion and his brother, Ate, everyone was getting the two Jasper sons confused in the warm up arena:)  Neo and Julia literally brought the house down with their hand gallop.

His combination number is 358331BR