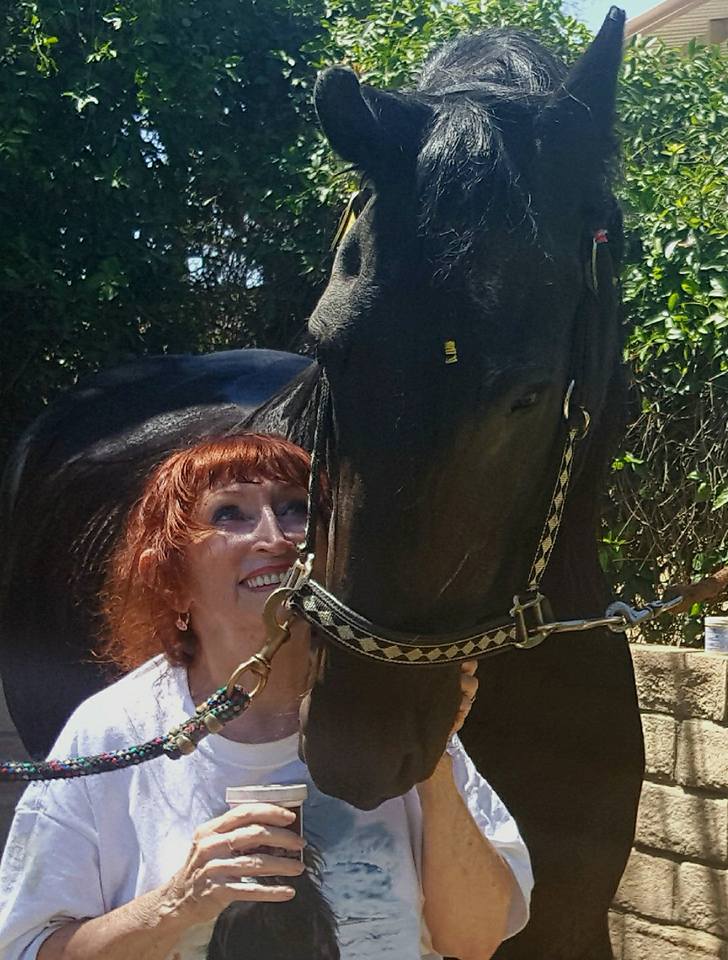 Videos: (copy and paste into your browser)

Here is his training test video from June 08

Barton is a stunning 7-year-old Friesian gelding of the Olof/Oege line. He stands 16.1 hands tall, has lots of that beautiful Friesian hair, has displayed consistently excellent health and soundness, and is up to date on all his shots, shoeing, etc. He has an excellent dressage foundation and in the three shows he entered last summer, he placed from first to third in every show (ranging in scores from 61% to 70%). Barton is a very promising dressage talent!

Barton is also a very loving gelding, and is extremely willing and very sensible. He doesn't mind going new places, as evidenced by the fact that he was recently ridden in a local Veterans Day parade! ( see photos above). He also pulled a coach during his time in Europe. Barton LOVES verbal praise and encouragement, not to mention after a workout he will be looking for carrots! If you stand in front of him, raise both arms and point backwards and say 'back' he will back-up. His sidepass under saddle is excaeptional! Here are Barton's dressage scores: Intro Levels 66% - 70% First & Second place ribbons Comments: Walk & Trot 7's, Impulsion 7, Submission 7, Straightness on centerline 8 Training Levels 61.30% - 63.57% Second & Fourth place ribbons Comments: Working trot 7, Impulsion 7, Circles 7, working canter 7. He travels to the shows and settles right in like he has been doing it for years. And he is current on all shots, worming, etc. If you are looking for a reasonably priced friesian with a heart of gold, come take Barton for a ride! And wanna go to a show? At his very first dressage show he took 1 first place (70%)and 3 second place ribbons (65.5%, 66% & 67%) . He is like riding a big soft couch---- he has a lovely rocking horse canter! At his second show in Training Level 1 & 2, he scored between 61.57 and a 63.75 taking home two second place ribbons and a third place ribbon, not too bad for his second show! Everyone at the show was drooling over Barton's beautiful presence, he is such the charmer. At every show he was a ribbon winner!

And there was a 21 cannon gun salute, 2 F-16's flew over, noises and surprises galore at the recent parade Barton participated in, and this experienced, mature 7 yr old gelding took it all in stride.There were bands, bag pipes, jeeps, motorcycles, clowns, balloons and TONS of flags; he even had to walk over the six lane freeway overpass.... and Barton just kept walking along! He will stand for hours and let you groom him; you can even sit under him on a stool and comb his feathers, he loves it. This boy has tons of potential for those looking to show a little in dressage--He was shown Intro and Training level through training level 4 and is schooling First Level. He has three beautiful, strong and free flowing gaits and his regal demeanor draws attention in crowds.

This is a tall mature Friesian with a gorgeous head, great mane, an impressive topline and a heart of gold! We think he has an impressive future ahead for the ambitious competitive dressage rider, but is also equally appropriate as a wonderful pleasure/trail partner!